This is the last team building that I am participating before I am leaving this company.

I was struggled a little, whether I should go. It rained in the early morning, made me felt even more reluctant to go. But later, I talked to myself. "Hey, you love to organize team buildings, why don't you take this chance to see how people organize the "outdoor" event when it rains, or when lesser people showing up." Yes, I have this feeling it would be even more people ffk especially on a rainy day. Oh yeah, this is the excuse I gave to myself to go ahead to the team building! :D

We had the team building at Pulau Jerejak. There were only 30++ out of 170++ people when I reached the registration area. The boat service was late, and the breakfast time was late too. I felt a lot like a big gathering, mingle around in cliques.

Finally, the outdoor event started. We were divided into 7 groups, 11 people each. Our team decided to have the first one in our line to be the leader, and we started to brainstorm our team name. I was standing in the middle, passing the messages back and forth. The member from behind suggested Cougar, later the member in front asked if Cheetah or Cougar run faster. There were some more suggestions; at last we decided our team name to be Cheetah. The outdoor event was not a competition. It was just some tough obstacles to “walk through”. :D

Here’re some of the photos.

Azhar is our stress tester. 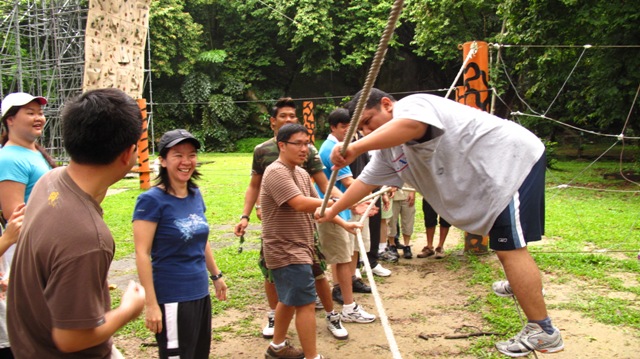 YW is glad that he made it too! 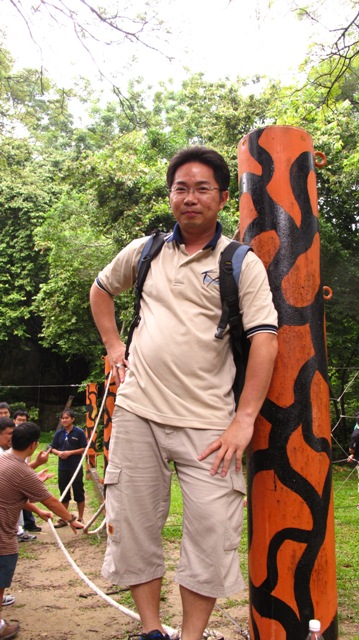 She is the first girl to try on this. 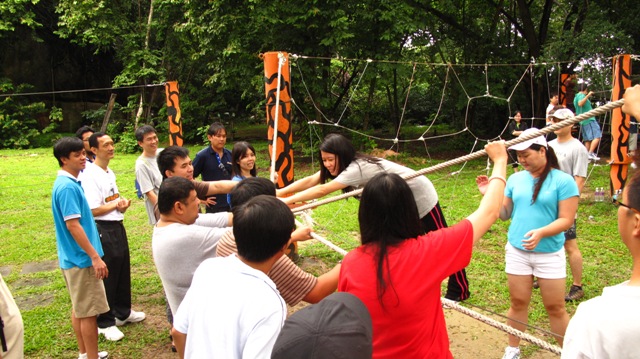 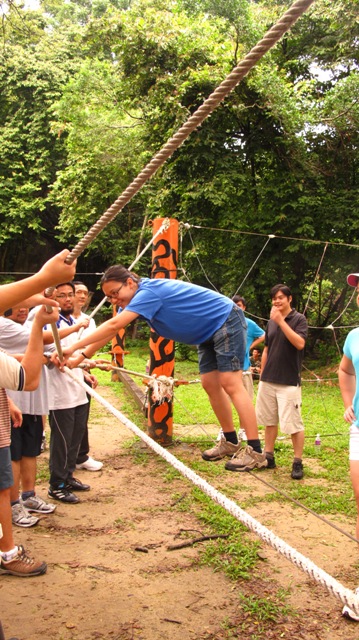 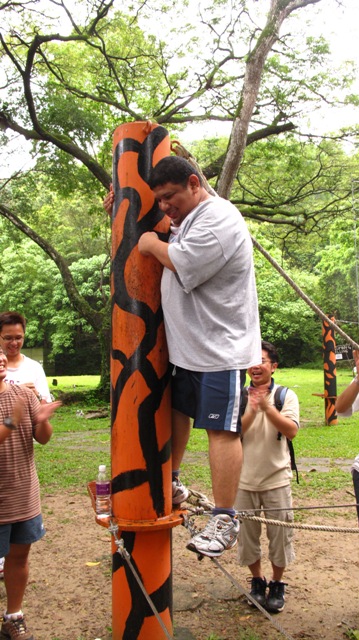 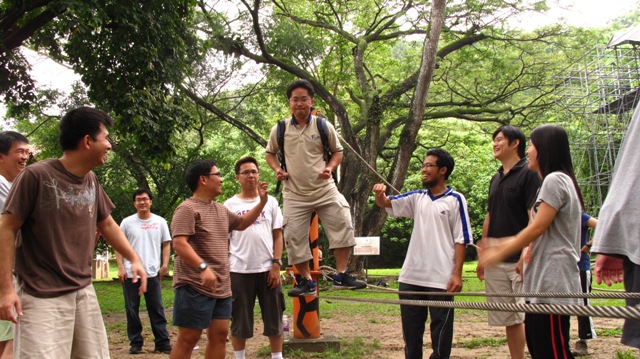 David is sliding on the 2 tiny wires. :) 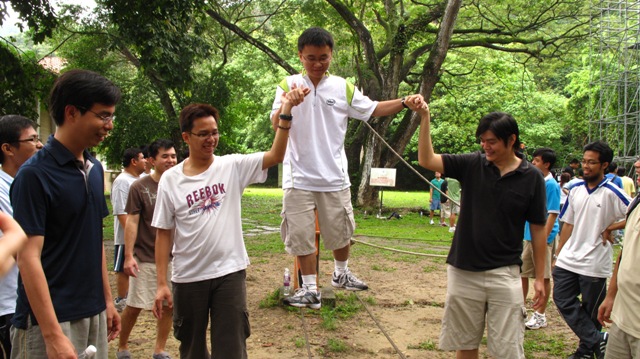 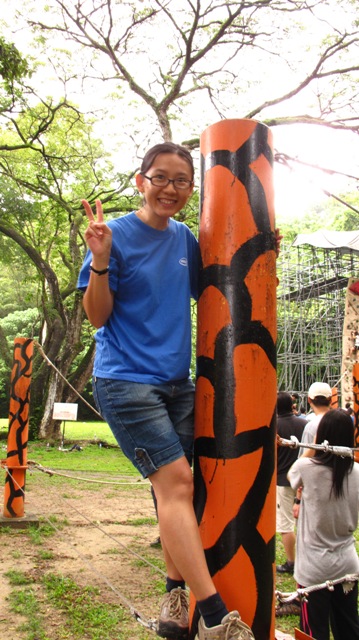 Mary walked with slippers on. 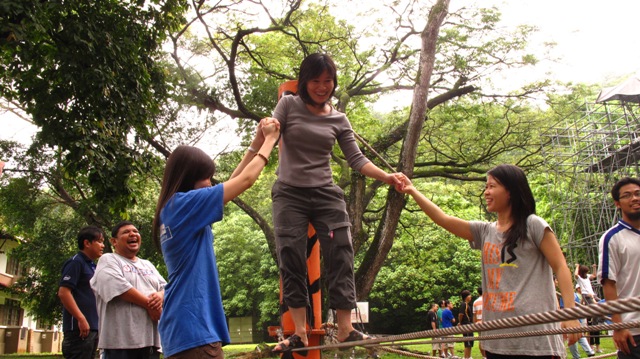 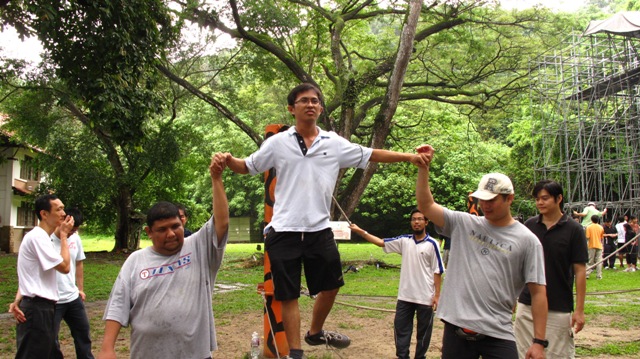 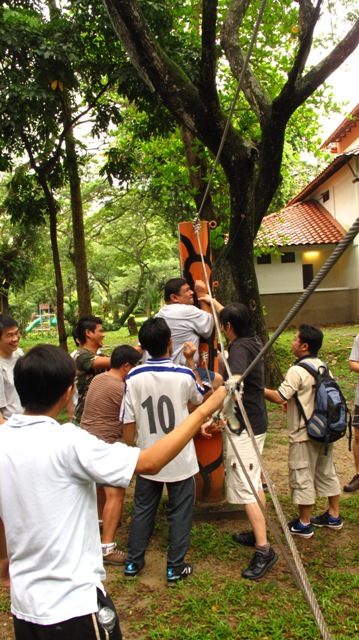 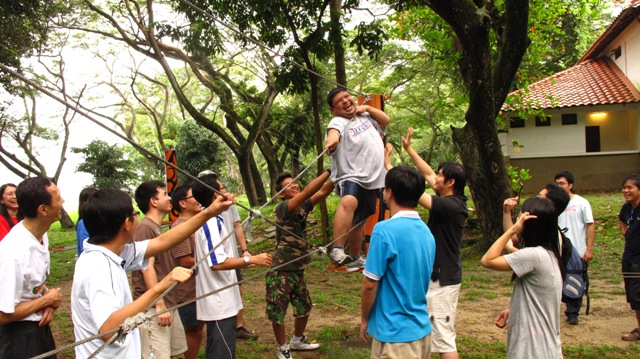 Some more attempts before the rain starts... 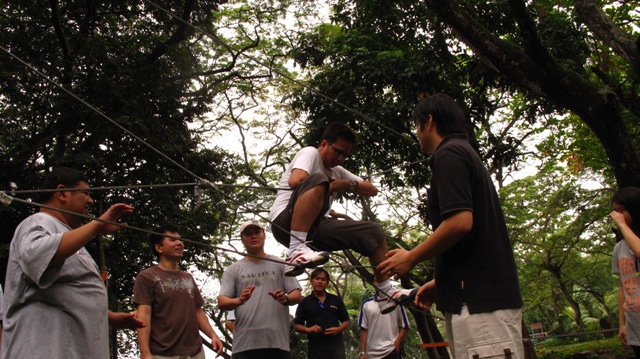 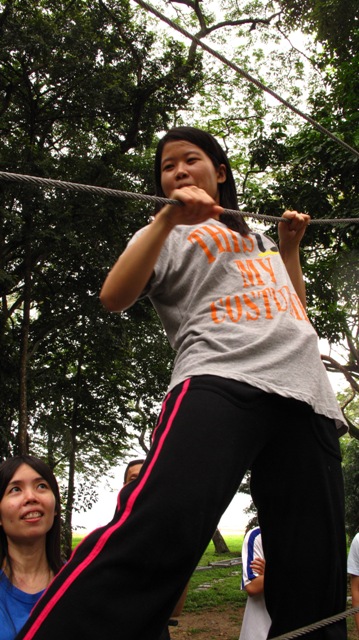 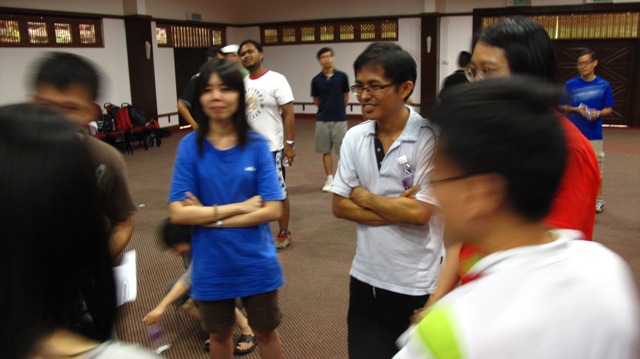 Just when the rain stopped, we continue with treasure hunt. 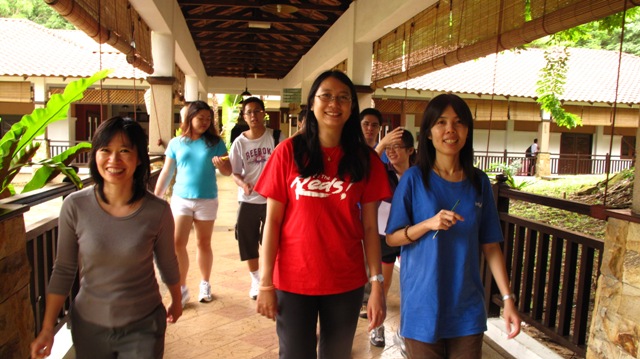 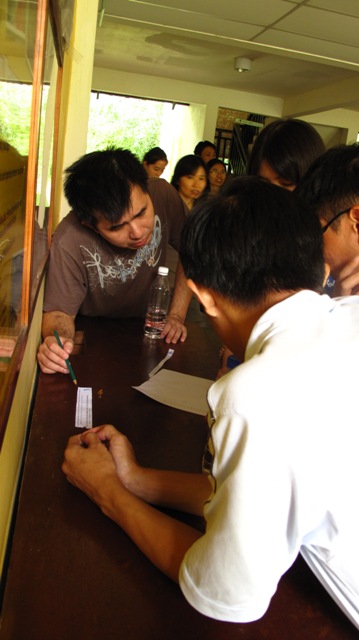 Our team won the first place, but no first prize. :P 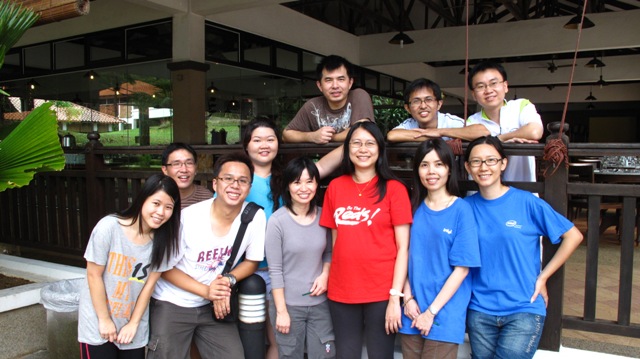 After lunch, it was the indoor activities. The HR hosted it. He introduced some games, and from the game and his observations, he shared his thought with us. This is more like a team building events. Probably the morning session is break-the-ice session. :P

I didn’t take many photos, or the photos I took are too blurred. We played a few games. I am so lazy to describe them; especially when I don’t have any photo to show them. :P 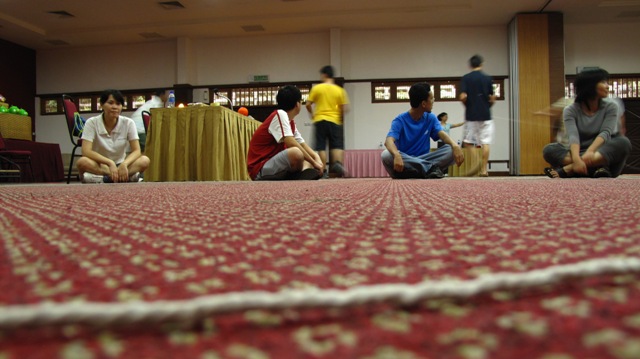 Anyway, the funniest and took the longest time is the angry bird game! We are divided into 2 big teams, and each big team has 2 sub groups. One of the groups will construct the piggy house and the other one will construct the shooting platform. (OK, I don’t know what they are called exactly.)

This is our shooting platform. 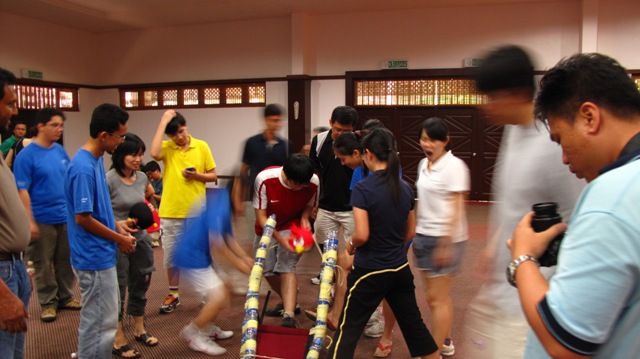 This is our piggy house. 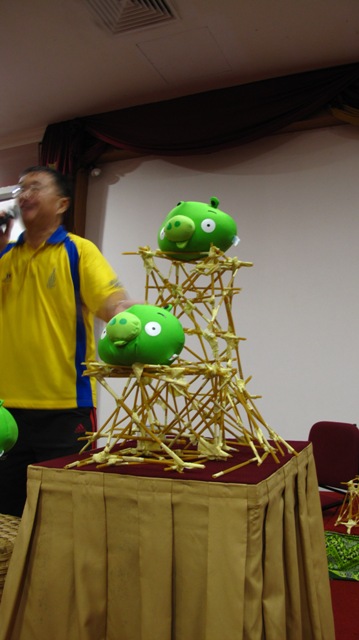 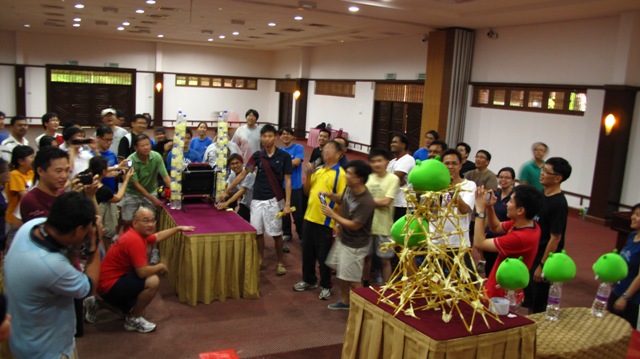 Our team’s turn to shoot the opponent’s piggy house. 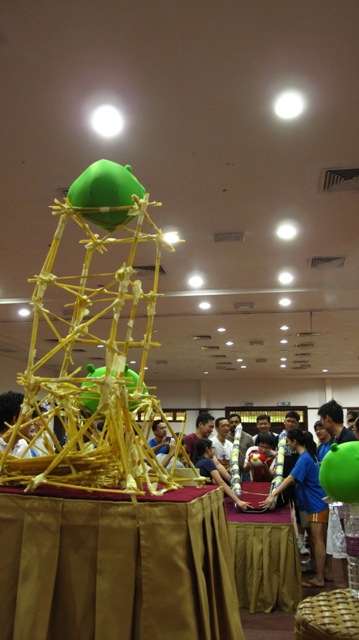 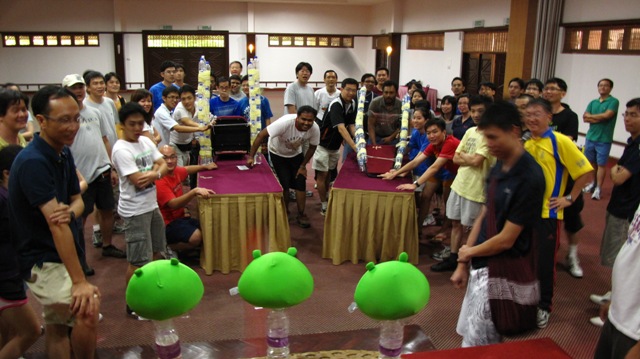 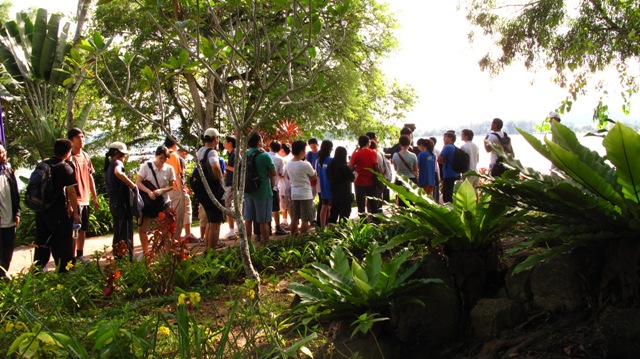 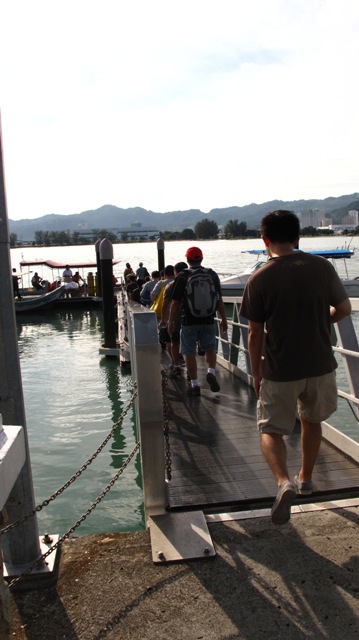